A greenway along a creek, victorian age mansions, and a creepy/beautiful cemetery make Montford a perfect place to tour on an electric bike!

The neighborhood known as Montford was first developed in the mid 1890s, and was originally home to around 50 people. As Asheville grew, so did Montford! Throughout the teens and twenties, Montford became home to Asheville’s middle class, as well as many working class families. Today it is one of Asheville’s oldest and most beautiful neighborhoods.

Many Biltmore Estate craftsmen stayed in Asheville after construction was complete, and the talents of these incredible designers can be seen throughout Montford. The neighborhood has many examples of Queen Anne and Victorian homes, as well as Greek Revival, Tudor and many others. In fact, Montford is one of the most architecturally diverse neighborhoods in the entire country!

Riverside Cemetery was established in 1885 and is the site of over 13,000 graves, 9000 monuments and a dozen family mausoleums. Riverside sits on over 87 acres of rolling hills and ancient trees, and is open to the public year round.

Some of Riverside’s most famous inhabitants include authors Thomas Wolfe and Sidney Porter, better known by his pen name O. Henry.

The Reed Creek Greenway serves as a connector between downtown Asheville and the University of North Carolina Asheville (UNCA) campus. It is a paved trail that is roughly .75 miles long between its starting point on Magnolia Avenue, and the intersection with Broadway street at the other end.

Just across Broadway street from the end of the Reed Creek Greenway you’ll find Asheville’s Botanical Gardens. The Botanical Gardens is a 10 acre non-profit dedicated to the preservation of native plant species of Southern Appalachia. Admission is free, though you will need to lock the bikes up on one of the bike racks. The trails are for pedestrian traffic only.

If you get Hungry 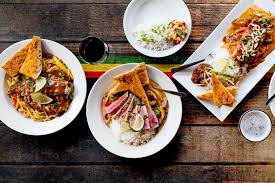 If you get hungry, stop at Nine Mile for some delicious Caribbean inspired pasta (yes, it sounds like a strange combination, but this place is amazing). Nine Mile is a truly unique fusion, and I’ve never been disappointed with a meal there. Trust me, you’ll thank me later.

If you get thirsty 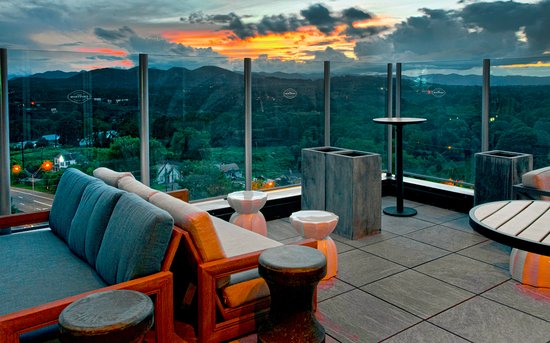 If you get thirsty, head to The Montford Rooftop Bar. Located on the roof of the Hyatt Place hotel, The Montford offers craft cocktails and small plates, as well as unobstructed views of the Blue Ridge Mountains. Take in the view with a delicious cocktail in hand.

At Asheville E-bikes, we encourage exploration. Montford has so much to see, you can spend hours cruising around and taking it all in. For this e-bike tour, you’ll want to spend at least a couple hours exploring, and if you plan to grab something to eat or drink, four hours is perfect. Grab a bike and get out there!